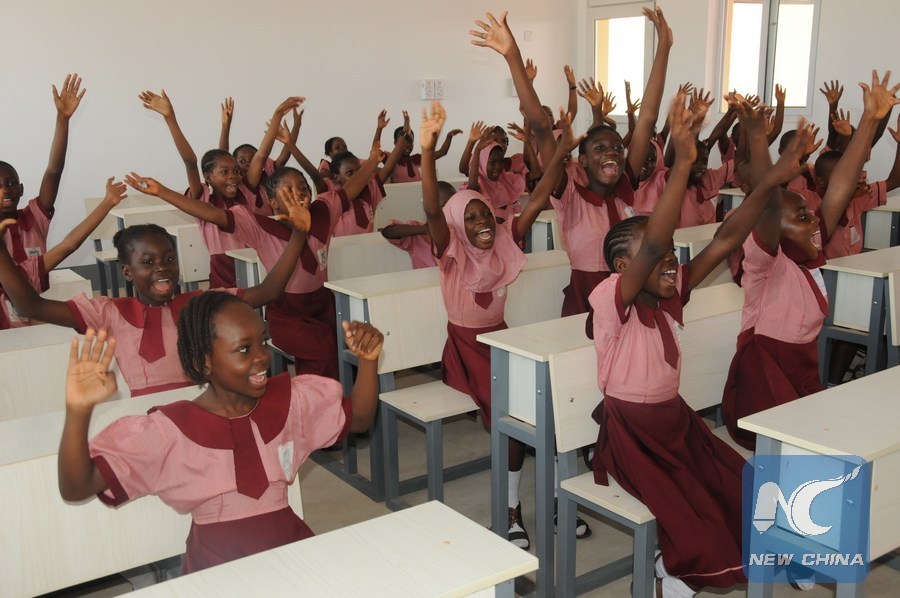 Image Above: Students cheer in a new classroom at the China-Assisted Model Primary School in Abuja, Nigeria, July 6, 2018. (Xinhua/Zhang Baoping)

Enrollment in primary schools in Nigeria increased between 2008 and 2015. However, the number of out-of-school children had increased within the same period. The quality of basic education, measured in terms of student learning outcomes, is low on average in Nigeria, likely contributing to the high out-of-school rates for both boys and girls. According to international standards, children who have completed grade 3 are expected to be fully literate. Yet in Nigeria, only 66 percent of public school students can read at least one of three words and 78 percent can add single digits after completing grade 4 (2015 Nigeria Education Data Survey).

According to the 2018 World Development Report titled Learning to Realize Education Promise, learning outcomes are now more important than ever. Schooling is not the same as learning. In Nigeria, poor learning results in low pass rates at the end of primary and secondary school. A 2013 Service Delivery Indicator (SDI) Survey produced an overall low score of 32 percent for primary 4 pupils across the country. In 2014 and 2015, only 31 and 39 percent of registered students passed the West Africa Senior School Certificate Examination, respectively.

Is Nigeria learning or learnt from the grim statistics above? Is it likely for a Nigerian that is 38 years old presently to see pass rates of grade four pupils move from 32 percent to at least 50 percent before he or she turns 76? Probably yes, provided the country can learn, and become adaptive in thinking about the future. In thinking about the future, evaluation is important! In this article, I took a retrospective flashback at the 5 key lessons from the World Bank Nigeria State Education Sector Project (SESP) implemented between 2008 and 2011 in Kaduna, Kano and Kwara states. SESP objective was to (i) improve the quality of basic education in targeted Local Government Areas (LGAs) (ii) Improving participating girls’ learning conditions and (iii) Increasing transition and completion rates for boys and girls in targeted LGAs.

Learning and sustainability of pilot activities are limited when there is an absence of clear design, an explicit mechanism for evaluating, and a sufficient implementation time frame. Initiating the girls’ Conditional Cash Transfer (CCT) during the last year of the project provided insufficient time to implement the pilot. As well, it is difficult to determine the benefits and effectiveness of the pilot Early Childhood Development (ECD) activities, given the absence of the monitoring and evaluation system and implementation plan. Without strong design and evaluation, there is no way to identify whether the pilot activity is worthy of scaling-up or sustaining. Pilots generate further interest in sustaining or scaling-up when robust data are collected. The motive of political institutions can hinder the effectiveness of a program, thus affecting the M&E system. The year CCT was introduced was the year of presidential and gubernatorial elections, as such politicians might decide to use the CCT to gain patronage from the electorates who will benefit from the CCT.

Learning and sustainability of pilot activities in the #education sector are limited when there is an absence of clear design, an explicit mechanism for evaluating, and a sufficient implementation time frame.

Setting up a monitoring and evaluation system takes more time than Governments often recognize and provide. An overly complex system was designed and replaced with a simplified one. In environments with low capacity, understanding the critical data needs of the Government is essential, as well as the amount of technical assistance that will be required. During this project, it took considerable time for the States to collect and analyze the Annual School Census. The Annual School Census, also known as the National School Census (NSC) is conducted yearly and designed by the Federal Ministry of Education to collect comprehensive education indicators, harmonised with global standards. The NSC was designed to know and authenticate the status of the primary pupils’ enrolment, number of teachers, facilities etc. The National Bureau of Statistics (NBS) currently provides these data, but it is highly likely that policymakers do not refer to such data, as evidence to inform decisions. By properly designing a simple sectoral M&E system fo use, you can make policymakers see the reason to make decisions based on evidence from data published.

Setting up a monitoring and evaluation system takes more time than Governments often recognize and provide. A simple approach to the collection of data and evaluation could suffice in an environment will low capacity. A prior unsuccessful project can result in learning, but it depends upon an accurate understanding of the performance issue. This project avoided some of the shortcomings in the predecessor Bank project, Universal Basic Education Project. Department for International Development (DFID)’s Technical Assistance was aligned with the objective of this project. However, each partner worked separately to complete respective responsibilities within the project. Better coordination between the work of the Bank and DFID may have enhanced the Education Management Information System (EMIS), state and local capacity building efforts and teacher professional development.

In an attempt to address the evidence-based drought in policy formulation in Nigeria, as noted by an International Labour Organization mission in 1981, the National Data Bank (NDB) was established in 1986 now National Bureau of Statistics and later the sectoral data banks in 1988, including Education data Bank (EDB) which later became EMIS in 2003, and now known as Nigeria Education Management Information System (NEMIS). The Education Management Information System (EMIS) is a system for the collection, integration, processing, maintenance and dissemination of data and information to support decision making, planning, policy analysis, monitoring and evaluation of all levels of education system.

NEMIS is currently used in the gathering of all public school relevant input indicators. Indicators include teacher to pupil ratio, pupil to classroom ratio, number of enrollment etc. In the near future, one would expect that NEMIS will be able to capture outcome level indicators from perceptions data and student learning data e.g pass rate in the English language; teachers performance rate. From our recent evaluation of a basic education project in Kano State, there is still the challenge of proper coordination and synergy between state and the federal government as it regards the implementation of activities and programmes of NEMIS as planned, coupled with inadequate data management skills of NEMIS staff where they exist as a unit in states.

When teachers’ numeracy, literacy, and language skills are low, children’s learning will be compromised. This is particularly true in rural areas as more skill deficiencies were found among rural teachers. International partners need to focus their…

According to the National Teachers Education Policy (2014), two percent (2%) of national annual allocation/budget for the next ten (10) years starting from 2014 is to be set aside as Teacher Education Development Fund Account (TEDFA). Not until 2018, did the government develop a framework for the account.

According to the National Teachers Education Policy (2014), two percent (2%) of national annual allocation/budget for the next ten (10) years starting from 2014 is to be set aside as Teacher Education Development Fund Account (TEDFA). Not until 2018,…

Improving inputs into learning (facilities, textbooks, etc.) needs to be accompanied by defining and addressing quality requirements in terms of minimum standards for student learning. While this project improved the inputs and physical conditions for learning, these did not translate into improved student learning, as the key issue of teachers’ capacities, was insufficiently addressed by the project. When teachers’ numeracy, literacy, and language skills are low, children’s learning will be compromised. This is particularly true in rural areas as more skill deficiencies were found among rural teachers. There are also challenges in how teachers are allocated amongst schools. The issue of teachers capacity is still relevant today in Nigeria (Adekola 2007). The Kaduna State government tried addressing the issue by conducting competency test for teachers and relieving those that failed the test, off their job. The Kogi state government is doing the same. But is that the right way to go? Maybe no. But it is the reality every state government needs to face in Nigeria. To resolve this, will mean the gradual removal of the wheat from the chaff. Of course, the chaff could be made useful.  Motivate teachers financially and mentally. According to the National Teachers Education Policy (2014), two percent (2%) of national annual allocation/budget for the next ten (10) years starting from 2014 is to be set aside as Teacher Education Development Fund Account (TEDFA). Several test and monitoring activities on teachers’ performance should be designed. Retain the ones that can enforce learning and teach effectively. Develop a training program, with an existing teacher training institute for the ones that are average. The teachers that do not have the potential to teach effectively could be advised appropriately on other career paths. Learning is serious business!

We are enhancing the practice of Monitoring and Evaluation in Africa.

Back to top
Page load link